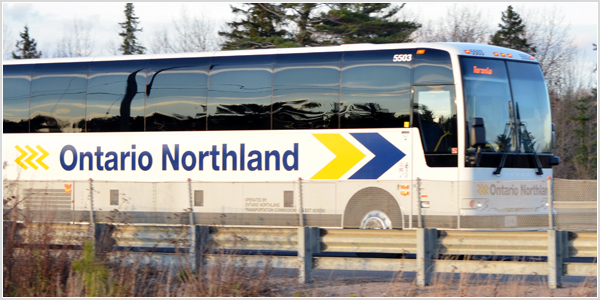 NORTH BAY, Ontario – Two Ontario rail advocacy groups say the recent expansion of Ontario Northland Transportation Commission (ONTC) bus service is not only the first sign of hope for northern public transportation users in many years, but it also paves the way to better rail service in the future.

“Any improvement of our system is welcome, whether that it be rail, bus or any other mode that is applicable and affordable,” says All Aboard Northern Ontario founder Eric Boutilier.  “Northern Ontario has seen nothing but a decline in mobility since January 1990, when the federal government hacked off half of the VIA Rail Canada system.  The damage done by those cuts was only made worse by the provincial government’s callous 2012 decision to end the ONTC’s Northlander rail service instead of modernizing it.”

Adding to this constant loss of public transport options have been reductions in privately-operated Greyhound bus service, Porter and Bearksin air services, and the regrettable demise of Caribou Coach Lines in Northwestern Ontario.

All Aboard Ontario president Robert Wightman adds, “It’s been a long time since we’ve been able to praise any of the players in Northern Ontario’s public transportation system.  What heartens us is that the announcement of new bus service for Sault Ste. Marie and White River, and an improved Ottawa-Sudbury service, clearly demonstrates the ONTC team has a vision.  They’re not just giving us more of the empty words we’re used to receiving from so many transportation agencies and politicians; they’re actually taking real and justifiable action.”

Beyond the obvious public utility of the new ONTC bus services, the two rail advocacy groups also see the potential to begin shaping a logical, affordable and sustainable rail core system for Northern Ontario’s transportation system of the future.

Says Boutilier, “Just constantly bleating about how we deserve a larger and better rail service now isn’t going to cut it.  Passenger trains are expensive tools for the provision of public transportation and their use has to be based on solid market demand and planning that factors in all the requirements to sustain them.  A core rail system serving this region and linking us with Southern Ontario is a noble and worthy objective, but just demanding that it be implemented overnight is naïve and totally unrealistic.”

The two All Aboard citizens’ committees are about to launch a project that will demonstrate the realistic approach to the rail issue by commissioning a professional concept plan for the development of a modernized ONTC rail passenger service on the Toronto-North Bay-Cochrane route, formerly served by the Northlander.  The All Aboard plan, which will be completed later this winter and well ahead of the provincial election, will be presented to the public and politicians of all three provincial parties through a series of town hall meetings throughout Northeastern Ontario.

“Our consultant’s plan will lean heavily on improved ONTC bus service and other rail and bus services to deliver a comprehensive, integrated operation for that route and beyond,” says Wightman.  “Our consultant is drawing on the precedents and experience of other successful rail services elsewhere in North America that started with bus feeders that built strong market demand by connecting with existing rail passenger routes and other public transportation services.  GO Transit is a prime example.”

The members of the All Aboard Network are, therefore, convinced that the recent ONTC bus expansion plan will help build a similar case for mid- and long-term rail passenger services.  The need now is for further bus improvements to help create the multi-modal, high-performance public transportation system Northern Ontarians needs, deserve and will support.

-30-
**ARCHIVED FROM ALL ABOARD NORTHERN ONTARIO**